Let's have a demonstration! 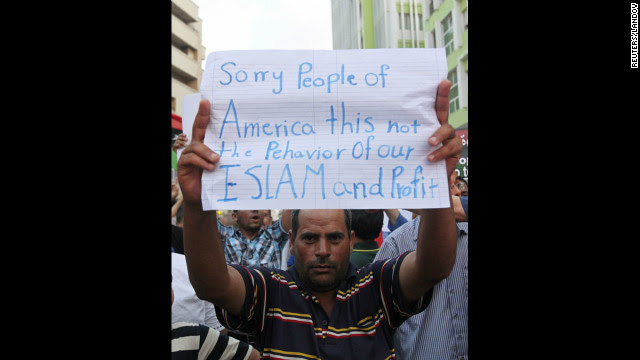 Let's get out with signs and tell the world, and the Muslim world in particular, that we Americans do not support the lunatic Islamophobia of "Pastor" Terry Jones and whoever concocted the offensive film that set off this outrage.

Sorry Muslim people. That film is not the behavior of Christians, or Jews, or Americans of any religion or no religion. It was the work of detestable trash whom we repudiate. This is not who we are. The people of Libya have repudiated the murder of our ambassador and other Americans and throughout the Islamic world people of good will have come out to tell us that they reject groups that perpetrate this violence. And for our part we should let them, and everyone else, know that we reject the bigotry of the minority of Americans who insult Islam and promote hate.

How about 2 pm Sunday in front of the San Diego Civic Center for you who are local--with signs, like the one in the picture to get the message across that Koran-burning Terry Jones does not speak for us? And if you are not local, how about getting something going in your area.

OK, it probably won't work. I'm not an activist or an organizer. But on the off chance that some one who reads this, one of my Facebook friends or their friends of friends, is an activist and organizer, please consider this project.
Posted by Unknown at 8:26 PM