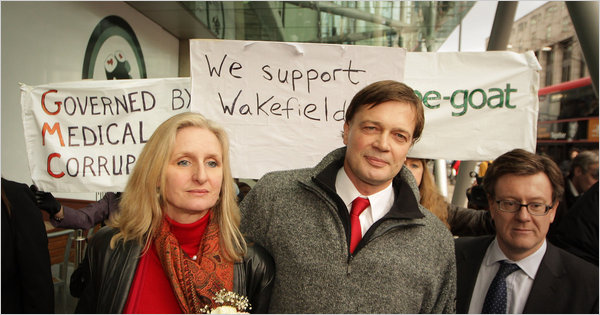 Some Harlem Churches in Fight for Survival - NYTimes.com

Ministers from churches across Harlem said they had yet to penetrate the walls of the high-price condominiums and the million-dollar refurbished brownstones that now dominate the neighborhood. Some, in truth, expressed little desire to do so. Others said they saw the gentrification of Harlem as an opportunity, but one as yet unrealized.

The gentry don't go to church. The New Atheists of course have an easy explanation: the gentry are too smart and educated to buy superstitious nonsense.

But the gentry buy all manner of other superstitious nonsense--food fetishes, conspiracy theories, alternative medicine and a variety doctrines that are not only empirically falsified but dangerous. It isn't, for example, the churchgoing masses who have for over a decade endangered their own children and the general public by refusing to have their kids vaccinated.

There is some good news: the doctor who invented the myth that MMR vaccine caused autism has now been defrocked--or whatever it is they do to doctors who misbehave in the most serious way. The story is remarkable:

In January, after the longest investigation in its history, the council found several instances of what it said was unprofessional conduct by Dr. Wakefield. It cited his taking blood samples for his study from children at his son’s birthday party; he paid each child £5, about $7.20 today, and joked about it later. It also noted that part of the costs of Dr. Wakefield’s research was paid by lawyers for parents seeking to sue vaccine makers for damages....The disciplinary tribunal’s action came after more than a decade of controversy over the links Dr. Wakefield and associates in Britain, as well as supporters among parents of some autistic children in Britain and the United States, have made between autism and a commonly used vaccine for measles, mumps and rubella. The suggestion of a link caused use of the vaccine in Britain and elsewhere in the world to plummet, a development that critics of Dr. Wakefield said contributed to a sharp rise in measles cases in countries where the vaccine was in use...

The council said he had shown “a callous disregard” for the suffering of children involved in his research. The ruling banning him from practicing medicine on Tuesday was a sequel to the January finding...In all, Dr. Wakefield was found guilty of more than 30 charges.

“The panel concluded,” Dr. Kumar said, “that it is the only sanction that is appropriate to protect patients and is in the wider public interest, including the maintenance of public trust and confidence in the profession.” He said the sanction was “proportionate to the serious and wide-ranging findings made against him...

Dr. Wakefield resigned in February from his position as a staff researcher at Thoughtful House, an alternative medicine clinic in Austin, Tex...A 2007 annual report for the clinic has a picture of Dr. Wakefield looking into microscope with a caption that reads: “Where would we be without Dr. Wakefield and your entire team? Thank you for your courageous efforts in swimming against the tide. Without you we would still be hearing, ‘There is nothing we can do.’ Because of you we know the hope is great and the progress is attainable.

It wasn't the huddled masses who followed (ex-)Dr. Wakefield or financed his operation.


There is, of course, fashionable nonsense and unfashionable nonsense--upscale nonsense and vulgar nonsense. What's interesting is how that gets sorted out. It isn't a matter of the degree of nonsensicalness. Wakefield's alternative medicine is as nonsensical as the doctrine that humans walked with dinosaurs--equally unscientific--but you can bet his clients wouldn't be caught dead espousing Young Earth Creationism. Feng Shui is dumber than most forms of theism but you can bet also that the yuppie housewives who have their homes redesigned for high chi, and hang crystals at crucial locations to bounce the energies around, wouldn't be caught dead in church.

Theological revisionism, reductionist programs intended to make Christianity acceptable to what used to be called Modern Secular Man, are a complete failure because the target audience is as grossly superstitious as a bunch of medieval Western European peasants or Hottentots.

So here's the grand question: how can the Church exploit the superstition and stupidity of the Upper Middle Class to win them back?
Posted by Unknown at 4:32 PM No comments:

Are Democrats pulling back on faith outreach?

Are Democrats pulling back on faith outreach?: "If 2008 was the year Democrats finally got religion, will 2010 be the year the party loses it again?

This is the worry among some religious progressives, who worked to transform the image of Democrats from wary -- or even hostile -- toward religion to a party that hired faith consultants, advertised regularly on Christian radio and featured candidates, including Barack Obama, who spoke openly about their relationship with God...Some religious leaders and Republicans always viewed the Democratic appeal to churchgoers as little more than window dressing -- much the same way that many African American leaders and Democrats dismiss GOP efforts to reach out to minority voters.

Of course it's true. Most of the progressive policy-makers are polite upper middle class agnostics who are clueless about religion. No one they know is religious. The religious folk are those working class white ethnic and rednecks in fly-over country. But we've got to suck up to those dummies so we'll make conservative-evangelical noises.

There were still enough of them during the last election to push Obama over the top. Obama, who is of course a polite middle class agnostic making religious noises to suck up to us religious folk. But the demographic is shrinking and it probably isn't cost effective to do any more sucking up at this point.

It's tough being a religious person in my demographic. I hate being being lumped with the evangelicals. I hate the assumption by the progressive policy-makers that people like me will be mollified by Obama's making nice to a piece of shit like Rick Warren or by support for church-run charities, which I oppose. I hate the fact that religious believers are now a minority special interest group, assumed to have a characteristic political agenda.
Posted by Unknown at 8:21 AM No comments:

I've been reading this book by Philip Jenkins, who is quickly becoming my favorite church historian. According to Jenkins, the Church eventually lost half the world by persecuting the Monophysites and Nestorians who dominated the Christian heartland--Egypt, Syria and Asian areas that eventually fell to Islam.

Why, he asks, did the Chalcedonian faction that became "orthodox" beat up on fellow Christians who disagreed about fine points of theology? Because both orthodox and heterodox Christians, Monophysites and Nestorians as well as Chalcedonians, believed that getting the metaphysics right was important. They were convinced that God cared about people's theological views and that he would not only punish individuals with wrong-headed metaphysical commitments but punish whole nations, the just and unjust alike, with famines, earthquakes, plagues and other natural disasters for harboring heretics.

I suppose it was only natural. The Byzantines were interested in metaphysics: shopkeepers argued theology in the streets. And I suppose it's natural to imagine that what is interesting is important.

Waking up this morning though I was struck with the blinding insight that the opposite was the case: the more important something is, the less interesting. And conversely, the things that are most interesting are utterly trivial and inconsequential. The paradigm case in point is philosophy, in particular my specialty--metaphysics. Philosophy is of utterly no importance whatsoever. It is trivial, inconsequential and utterly useless but, for those like me who have the taste, wildly interesting. On the other hand those aspects of life that are of vital importance--money, health, "relationships," business, household maintenance and such--are utterly boring. These are the aspects of life that we want to have settled in some minimally satisfactory way so that we can avoid any further dealings with them.

There is the beginning of all wisdom! We'd have saved ourselves any amount of grief in the past if we'd just recognized that the very idea that God gives a damn whether we believe he exists or not--much less whether we get the Christology right--is simply ridiculous. Theology is interesting--therefore inconsequential.